The Calvin Cycle occurs during photosynthesis and consists of light independent redox reactions that convert carbon dioxide into glucose. This conversion happens in the chloroplast, or more specifically the stroma of the chloroplast. The chloroplast region is an area between the thylakoid membrane and the inner membrane of the organelle which is typically located in the leaves of plants.

This cycle used to create carbon sugars, mostly, was discovered by Melvin Calvin, Andrew Benson, and James Bassham in 1950 at the University of California. The used radioactive material to trace the pathways carbon atoms took during the carbon fixation step in plant life.

You’ve probably heard the Calvin Cycle called a few other names including the CBB Cycle, C3 Cycle, and dark reactions to name a few.

This process of carbon fixing by plants is essential to all life on the planet. Most new organic growth stems from plants converting carbon to sugars either directly or indirectly. Other plants, or animals, can use these sugars to forms more complex sugars and amino acids when they consume them. It all stems from little plants working day and night to capture light and water.

A Technical Take on the Calvin Cycle The Calvin Cycle occurs during photosynthesis and is repeated until it forms a glucose molecule. Photosynthesis goes through two stages to create food and building materials for plants to grow. During the first stage, chemical reactions from light produce ATP and NADPH. The second stage is when the Calvin Cycle takes place. In this stage, carbon dioxide and water get converted to organic materials like glucose. These reactions are called dark reactions which confuses people, but they do not take place at night.

The short explanation of the Calvin Cycle is that it begins with carbon fixation. Carbon dioxide molecules are plucked out of the air to produce glyceraldehyde 3-phosphate. RuBisCO, an enzyme found abundantly around the planet, brings on the carboxylation of a 5-carbon compound and provides a 6-carbon compound that halves itself form two 3-phosphoglycerate. The enzyme phosphoglycerate kinase uses the phosphorylation to create biphosphoglycerate.

That’s a lot of massive words. What that means is the plant uses light and water to convert carbon dioxide into nutrients and oxygen. It takes six turns on the Calvin Cycle for the plant to produce a single glucose molecule. Now that we simplified the process, let’s look at the chemical equation for the Calvin Cycle:

The Simplified Function of the Calvin Cycle How plants create sugar from sunlight, water, and carbon dioxide is complicated as you probably noted from the previous section. However, plants toil away day and night creating glucose, starch, and cellulose so they can grow. The Calvin Cycle plucks carbon molecules right out of the air and creates new plant growth.

The Calvin Cycle is vital to every ecosystem, and it reaches far beyond the plants using it. Plants are the building blocks of all the food in any ecosystem. Herbivores eat plants for energy and growth while carnivores eat herbivores for the same reasons. In the end, everything goes back into the ground and plants start the process all over again.

If plants stopped all their hard work tomorrow, it would only take a few days for animals to start feeling the effects and starving. Herbivores lose their food right away. Carnivores would follow behind the herbivores. Plants make most of the basic building blocks we all need to continue life as we know it. Without their hard work, we’d all be doomed.

While plants are supplying us with the building blocks, we need to continue living, and they help out the environment in other ways. Because the Calvin Cycle depends on carbon dioxide, plants indirectly play a role in regulating carbon dioxide and other gases proven to be harmful to the atmosphere. Plants perform an essential role in helping us clean the air we breathe.

The Calvin Cycle Step by Step 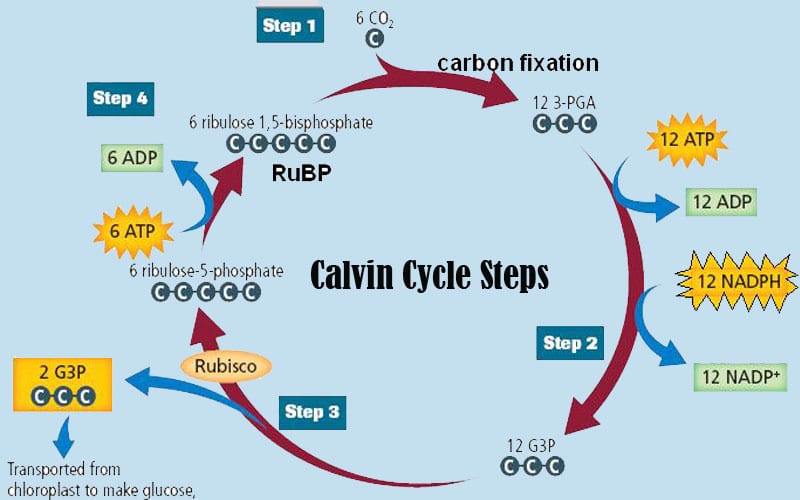 Carbon fixation is the first step. We explained it in brutal technical detail above, but let’s look at it in simpler terms in this section. A carbon dioxide molecule is plucked from the air and combined with a five-carbon acceptor molecule called ribulose-1,5-bisphosphate, or RuBP for short. The result is a six-carbon molecule.

The six-carbon molecule is split in half to form a set of new carbon molecules called 3-phosphoglyceric acid, or 3-PGA for short. The new three-carbon molecules are catalyzed by an enzyme called RuBisCo. This creates the simple sugar molecules the Calvin Cycle needs for stage two. On a side note, because it is used by every plant during photosynthesis, the RuBisCo enzyme if the most common catalyst on Earth. The result of this step is passed on to the next phase.

Step two of the Calvin Cycle is called the reduction step. The 3-PGA molecules created in the carbon fixation step are used in phase two to develop glyceraldehyde-3 phosphate or G3P for short. G3P is a simple sugar. This process uses energy and reactions captured during light-dependent stages of photosynthesis.

This step is called the reduction step because electrons are stolen from molecules created during photosynthesis and given to our new sugars. In chemistry, when you take electrons from a molecule, it’s called a reduction hence the name of this stage. Technically, the electrons are donated and not taken. Taking electrons by force is called oxidation, and that’s not what happens in this stage.

At this point, our plant has created sugar it can store for a long time and use for energy. Anything that eats this plant gets to take advantage of these sugars as well including humans. The plant may choose to use these stored molecules to form new plant materials or repair itself, but that’s not part of the Calvin Cycle so we won’t get into it. This is the end of the sugar-producing phase of the Calvin Cycle.

The final stage of the Calvin Cycle is called the regeneration step. Some of the G3P are held back and not used to make sugars. Instead, they are used to revitalize the five – carbon compound the Calvin Cycle needs to start the process over again. It takes six carbon molecules to make glucose, so plants have to go through the Calvin Cycle six times to make one glucose molecule.

Once the plant has completed this cycle six times, the Calvin Cycle ends and begins again. So, technically, the Calvin Cycle is all three steps done six times each. Plants repeat this process over and over during daylight hours. At night they continue to work making various compounds that don’t require light. This makes plants the most efficient lifeforms on the planet.

Bonus Information About Plants and Their Internal Food Factories

We usually consider waste products bad or at least not edible. However, we need the waste materials plants to produce to survive. An essential waste, or by-product, plants produce is oxygen. While plants are using water and carbon dioxide to make sugars, they release oxygen into the air around them as a waste product.

The delicious fruits and vegetables we all enjoy get most of their flavor from the carbon sugars plants store for energy. From the crunchy stalk of the celery plant to the succulent meat of the peach, plants developed all using just carbon dioxide, water, sunlight, and a few minerals leeched from the soil. I think we can assume these tasty treats are little gifts from the plant kingdom.

The tiny organelles called chloroplasts on the surface of a plant’s leaves can move. Ok, they can’t move individually, but in many plants, they can turn the leaf, so it gets better exposure to sunlight. These plant-based solar cells help capture sunlight so being able to point yourself in the sun makes sense. Some plants take it to another level and bend their stalk or branches to help reach the sunlight. The fantastic plants we ignore all around us are vital to our survival. They use energy from the Sun in little energy reactors called chloroplasts to do all sorts of cool things. If you glance at the bigger picture and oversimplify it, plants take light from the Sun and turn it into carbon sugars they can store for long periods of time. We could call them solar powered batteries if we want to be humorous about the process.

Plants pitch in and help everywhere they can from cleaning the air to enriching the soil they grow in for the next plants. Plants give us so many things from apples to steak. Without plants toiling away at the bottom of the food chain, nothing in the top of the food chain could survive. Every food we consume comes from plants either directly or indirectly.